GO BACK
Delegations of connected and sustainable African cities from different parts of the continent and their mayors gathered to embrace a movement for better ecological policies and practices.

On the 20 and 21st of September, with nearly 150 exhibitors and 3,000 visitors mobilized for an Africa Program around the African Cities Committee, the Innopolis Expo Paris 2022 summit was a meeting place for decision-makers at the local level to  discuss development and transition policies.

1.Strengthening local and regional authorities for the implementation of the Global Biodiversity Framework in Africa presented by Hugo Rivera-Mendoza, Team Leader of the Post 2020 Biodiversity Framework project and Ingrid Coetzee, Director of Biodiversity, Nature and Health at the International Council for Local Environmental Initiatives (ICLEI). (September 20)

2.Highlight: The meeting of the Francophonie of business! (September 21)

A solid experience of Cities and Subnational Governments’ mobilization

The Post-2020 Biodiversity Framework-EU is contributing to the mobilization of local and regional governments in the negotiations leading to the new global framework to be adopted next December in Montreal.

The project was a forerunner in this regard as early as June 2019, when it presented an initial roadmap at The Nature of Cities (TNOC) Summit to integrate cities, metropolitan areas, and subnational governments into global biodiversity negotiations. This was followed the next month by a Metropolitan Areas Declaration for the Global Biodiversity Framework in Medellin (Colombia). In February 2020, the Brazilian Perspectives on post-2020 global biodiversity framework (BIO2020) was adopted in Sao Paulo (Brazil) to provide contributions on key issues related to the post-2020 framework. It resulted in the Edinburgh Declaration for Local Governments, Cities and Local Authorities, recognized by the Convention on Biological Diversity (CBD).

From January 2020 to July 2021, the project funded monthly webinars on the biodiversity negotiation process for local governments in collaboration with the Center for Biodiversity in Cities of the ICLEI local government platform. The aim was to encourage local governments to sign the Edinburgh Declaration and submit nature pledges on the CitiesWithNature platform. The process was completed by online mobilization campaigns through social networks and digital platforms on World Environment Day, Biodiversity Day, City Day, etc. The organization of sessions on nature in the city at international summits involving local authorities have broadened and diversified the local authorities involved. A vertical integration of communities with national authorities was achieved through dialogues in six countries: Canada, China, Colombia, Mexico, Peru, South Africa.

“The Cities With Nature platform shows to the world what actions are being taken on the ground by subnational and local governments to protect and restore biodiversity.” Ingrid Coetzee, Director Biodiversity, Nature & Health, ICLEI Africa and Global Cities Biodiversity Center.

The synergy of local governments with – the private sector, finance, civil society and national governments – has been facilitated through the Post-2020 Partnership mobilization platform. A new WorldBio platform was launched in June 2022 at the WBIO2022 event in Sao Paulo in order to create synergies between local biodiversity project leaders and funding entities.

“The growing and catalytic contribution of subnational and local governments towards nature-positive economic models is one of the most encouraging aspects of CBD COP 15”. Oliver Hillel, Programme Officer, Subnational and Local Governments promoting transformative actions to implement the GBF.

For the next 2 years, the project will continue building this momentum by aiming to accelerate the implementation of the upcoming transformative GBF. 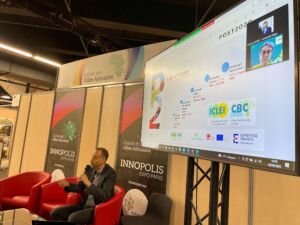 African local governments are crucial partners in the mobilization actions operated by the project. The Mayor of Kampala, Erias Lukwago, is one of the first signatories of the roadmap launched in Paris in June 2019. Subsequently, ICLEI’s Africa office based in Cape Town, South Africa, hosting ICLEI’s Biodiversity Center, has been trained in HR management, project monitoring and evaluation, financial procedures, and collaborative work. Through the project’s coordination with the EU Delegation to South Africa, an EU-South Africa Dialogue Facility dedicated to catalyze local government action for the implementation of the GBF was established. It has enabled an expanded dialogue with 44 districts in South Africa in partnership with the Department of Forestry, Fisheries and Environment (DFFE), for one year, in partnership with the European Committee of the Regions.

Urban spatial planning and the integrated approach to landscapes and coastal areas in the service of green cities have become structuring thematic axes of the new phase of the project, systematized in all technical assistance and capacity building activities of the project, providing an integrated response to the Sustainable Development Goals (SDGs) and the Rio Conventions.

For example, a range of technical assistance activities will start in Uganda with the Entebbe City Authority to develop a pilot case of positive spatial planning in nature. It aims to address the challenges of rampant urbanization and uncontrolled urban sprawl for the establishment of a green and blue grid with ecological corridors. Efforts will focus on updating a physical land use plan for optimized city spatial planning supported by field visits and data processing, training of city authority teams, and the completion of a documented study and its presentation at a dedicated workshop. Ultimately, the aim will be to identify sources of funding to replicate it at the national level and facilitate its scaling up to the regional level. The objective is to facilitate sustainable and resilient urban development and accelerate ecosystem restoration by engaging local communities and local governments. Other activities are under discussions in Morocco and South Africa on similar organizational schemes.

The COP15 Cities Summit in Montreal will also be an opportunity to make the voice of local and African authorities heard and to capitalize on the work accomplished over the past four years. 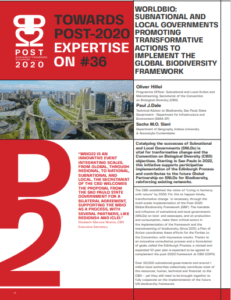