Biodiversity mainstreaming into sectoral decisions is key for achieving the transformative change necessary to implement the Post 2020 Global Biodiversity Framework. This event showcased lessons learned from 25 case studies in four continents, focusing on two key aspects: how to quickly realise a science –based assessment to support biodiversity mainstreaming at all scales and in sectors with the most impact on Nature, and how inclusive governance is essential to ensure its successful implementation.

The Rio Conventions Pavilion at CBD COP15 focused on addressing the interlinked challenges of land degradation, climate change and biodiversity loss. Supported by the Global Environment Facility-GEF, the Pavilion was a collaborative platform that promoted synergies among the three Rio conventions at the implementation level and showcased activities that link biodiversity conservation and sustainable use, sustainable land management and efforts to combat desertification, and climate change mitigation and adaptation.

With the world at a critical juncture, immediate, urgent, and increased efforts are needed to address the interconnected crises of climate change, biodiversity loss, and land degradation to ensure a sustainable future for people and planet. The Rio Conventions Pavilion played an important role in convening discussions aimed to build coordinated approaches and partnerships towards these interrelated, complementary and essential goals.

The session showcased how the assessment of threats to biodiversity conducted in 16 countries within the BIODEV2030 project was only possible with a science-based approach involving a multi-stakeholders dialogue for mainstreaming biodiversity. Only synergies between actors, data holders and researchers can ensure a holistic view for the assessment of impacts on biodiversity.

At the same time, the issue of synergies was at the heart of a second section that highlighted the need for inclusive governance and a whole-of-government and whole-of-society approach for effective mainstreaming of biodiversity. Based on experiences made by different stakeholders within the Post 2020 Global Biodiversity Framework-EU Support project since 2018, the event showed how only the integration of the perspectives, experiences and knowledge of all stakeholders can lead to success when it comes to mainstreaming biodiversity at all scales emphasizing again the importance of a whole-of-society mobilization for the successful implementation of the GBF.

Antonio Vergez (IUCN) presented a publication titled “Mainstreaming biodiversity into priority economic sectors – Lessons from the assessment of main threats in 16 BIODEV2030 pilot countries”, giving the floor to government representatives and experts from Gabon, Fiji, Ethiopia, France, Mexico and Brazil to share their experiences with mainstreaming.

“The BIODEV2030 multi-stakeholder’s dialogue has brought to my attention the importance of mainstreaming biodiversity in the kava industry in Fiji”, noted Prasanna Kumar, a young entrepreneur representing a family business and a stakeholder of BIODEV2030-Fiji.

A second segment was dedicated to showcasing examples of successful inclusion of stakeholders for transformative governance to ensure biodiversity mainstreaming.

Representatives from subnational and local governments in Brazil and from ICLEI reported on their experiences, followed by Youth representatives from South Africa, the business sectors but also experts’ voices from Costa Rica and from civil society.

Gavin Ewards, the Global Coordinator, Nature & People, WWF International ensured that “We have started to see a real broadening of the movement. At the IUCN Congress in Marseille, 112 organizations joined the coalition with a real ambition for nature and rights-based approaches. This movement will support a meaningful and rapid implementation of the GBF.”

An initiative to mobilize and trigger committments by Subnational and Local Governments and Cities was supported by the project. The platform CitiesWithNature, supported by the project between January 2020 and July 2021, has become part of a global community increasing collective action and tracking cumulative positive impacts for nature, people, and the planet. “Several launches and announcements took place at COP15, indicating CitiesWithNature and RegionsWithNature as the platforms delivering for biodiversity and implementing goals and targets for the GBF.” Ingrid Coetzee, Director of Biodiversity, Nature and Health at ICLEI.

Paul Dale, International Affairs Advisor, Secretariat of Infrastructure and Environment, Government of the State of Sao Paulo, Brazil added “We want to be transformative. We have only 8 years before reaching 2030 so we need to make quick progress together across sectors.”

Regarding Costa Rica, Eugenia Arguedas Montezuma, CBD National Focal Point, declared “In 2020, we started the consultation process called Costa Rica Mas Natura to build the Costan Rican ambition for the GBF. We managed to engage with many scientists and businesses in order to go beyond only political discussions.”

“The past 2 weeks we have been discussing on how to reach an ambious GBF. One main lesson is that we need to come together to tackle the biodiversity crisis and to create a whole of society approach.” Michael Ofosuhene Wise, Climate and Nature Manager, Business for Nature.

From their side, the youth pointed out the contributions of the Post-2020 Biodiversity Framework – EU Support project in creating spaces to coordinate and engage with leaders from different sectors of society towards an inclusive and ambitious global biodiversity framework. “In South Africa we didn’t have a platform where young South African could be involved in building the post-2020 GBF. (…) Through the Post-2020 Biodiversity Framework – EU support project, we managed to engage many stakeholders.” Kelet Sovionah, Youth Expert, South Africa.

“In 2023, the Economic Commission for Latin America and the Caribbean (ECLAC) will start another project on the mainstreaming of biodiversity within economic sectors and development of tools.” announced Victor Alvarado, High-level expert Post 2020 Biodiversity Framework-EU Support collaboration with ECLAC.

Thierry Dudermel, the Biodiversity Team Leader of the European Commission reminded that “The European Union is very committed in the negotiations towards an ambitious Global Biodiversity Framework but this will only happen if all the sectors of society, all the institutions are part of this process, and if we have this connexion between the political side and the implementation side.”

As stressed out by Hugo Rivera Mendoza, Team Leader of the Post 2020 Biodiversity-EU Support, “The whole-of-government and whole-of-society approaches are not empty words, they must be the method of choice to ensure the ambition, commitment and active contribution of all stakeholders to realize biodiversity mainstreaming at all scales and in all relevant sectors”. 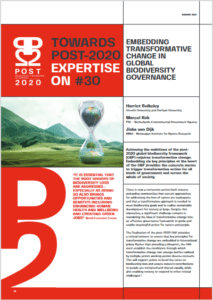